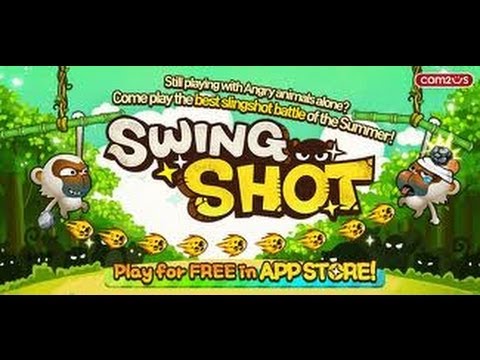 Pick up the gauntlet and exact your punishment. Exercise your ninja fingers. Sharpen your eyesight. This is no mere game. “”Swing-shot”” your opponents to oblivion, and come out victorious as the ultimate monkey-panda-sloth of the jungle!

Have you ever wanted to throw a beehive at a monkey? How about knocking a sloth off its branch with a pineapple? Ever wonder what sound they’d make? We all miss being the sling-shot king of the neighborhood… Now you can satisfy those deep-seated desires and make them reality. And best of all, everything is real-time! Try your hand at an all-new network monkey battle with Swing Shot!

★ With *Swing Shot PLUS*, the paid version of Swing Shot, you’ll start the game with 1,000 bonus coins and play without advertisements! (However, your bonus coins can only be given once per hub account)

This game is free to play, but you can choose to pay real money for extra items.

★ Supports English!
Also in French, German, Japanese, Korean, and Chinese.
So you can throw a rock, roche, 돌, 岩, or 岩石!.

✔ Simple and Fun!
Everyone can play: Just drag and release!

✔ Lots of network battle modes!
Good ol’ fashioned throws in
Be efficient, sleek, and deadly in
And just get crazy in…

✔Unique features in Arcade Mode!
Build up your skills in the 4 worlds and 48 stages of Arcade mode.
Hit enemies hanging from balloons!
Don’t miss the cowards hiding behind rocks! They REALLY deserve it.

Other fun and exciting games are available, too!