Under The Skin – Stage 5: Raccoon City 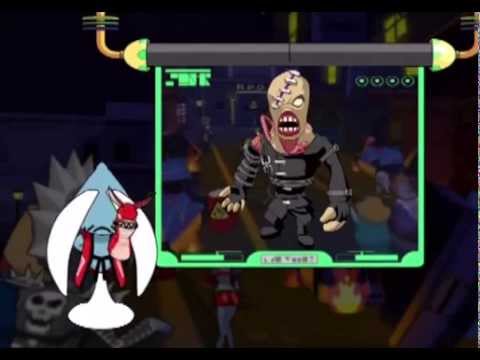 There’s a zombie outbreak in Raccoon City!
This stage is different from the other stages in several ways. Instead of competing with the other alien like you normally do, here you work together for a common goal, and instead of collecting coins your main objective is to simply reduce the coins of a biological weapon, known as Nemesis, to 0.
Nemesis will fall down and drop several of his coins every 5th hit from any trick item, so surefire items and items that have multiple uses are the best. Nemesis has a gun and he can do a crazy running attack, but mostly he’s not at all scary because he runs slower than you, the bullets fly relatively slow and Nemesis easily forgets about you when you run away.

The panic time here apparently makes Nemesis stronger and turns every random item you have into viruses.

The idea of this stage, with the zombies and the Nemesises and the location name, was later on completely ripped off by Capcom themselves in a survival horror game series sequel called Silent Hill, where a little Japanese girl with a magic camera takes pictures of dinosaurs.